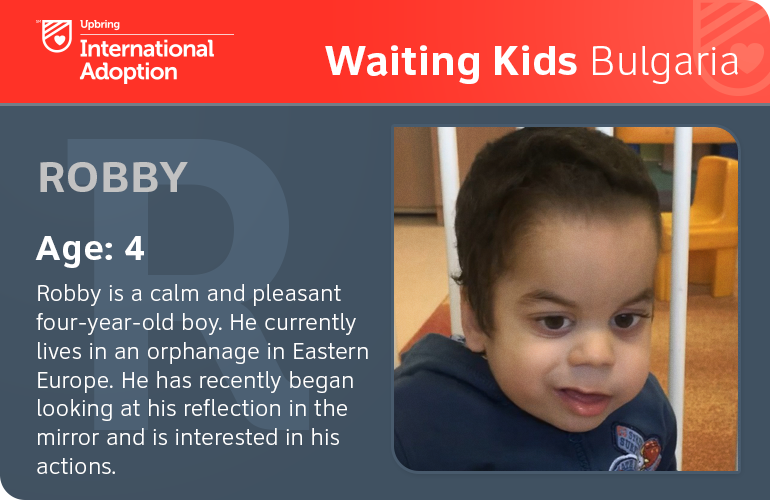 Robby is a calm and pleasant four-year-old boy. He currently lives in an orphanage in Eastern Europe.

He has delays in his Neuro-psychological development. He has been diagnosed with intraventricular bleeding, nonspecific reactive hepatitis, muscle hypotonia, lack of speech and other issues. He is working with a speech therapist to refine his ability to speak.

Overall, Robby is in good condition. He has shown progress in his general and fine motor skills. He can walk with support. Robby can play with cubes by putting them into and taking them out of a cup, but has some problems manipulating smaller objects. He enjoys throwing objects and chasing after them.

He has recently began looking at his reflection in the mirror and is interested in his actions. He doesn’t show great interest in other children, but gladly accepts the company of adults. He enjoys receiving attention. He often prefers to play alone with his toys. He is well attached to his foster parent and responds well to her.

At Upbring, we recognize that children enter the system at different stages of their lives and due to varying life events. Because the types of abuse and neglect vary among children, we are committed to raising the standards and addressing the entire spectrum.

Upbring will accomplish this through an innovative continuum of services and community partnerships, each tracking progress against markers of safety, life skills, education, health and vocation, all of which are critical to breaking the cycle of child abuse.

Health. We know that children of parents with substance abuse disorders are 3 times more likely to be abused and 4 times
more likely to be neglected, making a holistic approach to treatment and recovery options
that incorporate family services essential. (Learn more about Phoenix House here.)

We know that foster care placement is 34 times higher for families experiencing homelessness than the general population of same aged children. We know that more than 1 in 5 youth who age out of foster care will become homeless after 18.